What will the weather be like in Cancun in December? It is crucial information to decide if you can start making your reservations.

I’ve been to Cancun for 2 months and spoke with many locals, ex-pats, and travel agencies. Here is what you need to know about the weather in December.

As a bonus, I also added a list of events and tips at the end of this article. It will help you to improve your trip quickly 😉

Plan your trip around Cancun

In 2 months, I’ve spent more than 10,000 USD to test the best activities in the Riviera Maya. Stay with me to quickly decide which experiences you should do and learn how to make the most of your trip.

Cancun weather in December: The takeaway

How is the weather in Cancun in December?

Most travelers going to Cancun would say that any time of the year is the best time to visit this paradise on Mexico’s Atlantic coast. December is the busiest season because it features the most pleasant weather.

The rainy season goes from May to October. This time tends to be hotter and more humid, although it’s still pleasant because beaches and hotels are less crowded.

Rainfall is typical in the tropic, with heavy but short showers. You will also see skies with cloud cover in the rainy months.

December is the beginning of the dry season, with an average rainfall of 112 mm (4.4 Inches) during about 6 days of the whole month. Don’t think you’ll only get sunny days.

Despite December being a dry month, on average, skies are not as clear and blue as those between March and May.

The sun hits this part of the planet for 7 hours a day in December. The monthly average of sun rays throughout the year is 7.5 hours per day.

However, sunshine differs from daylight, about 10 hours 55 minutes in December. These days are the shortest of the year (the longest day is June 21). In December, sunrise occurs at 7:30 a.m. and sunset at about 6:00 p.m.

The average high temperature in Cancun in December is a pleasant 23.9 °C (75 °F) with a mild, cooling breeze.

The warmest average temperatures throughout the day are from 10 a.m. to 8 p.m.

December is the third coolest month of the year. In the evenings, the average temperature can go down to a cool 18 °C (°F). However, it’s not that often.

The average relative humidity of Cancun in December is about 79%, which makes it more pleasant, and you’ll sweat less.

There is an average of 23 muggy days in December. The two drier months are January and February, whereas the most humid month is August, with all muggy days. June is also known for high humidity.

Cancun is one of the areas hit by hurricanes, tropical storms, or strong winds worldwide.

Nevertheless, Cancun has been hit hard by storms on only two occasions in the last 35 years: Hurricane Wilma in 2005, and Hurricane Gilbert, in 1988, which even “ate” part of the shore in Cancun.

The official hurricane season is from June to November, and there is a higher probability from August to October.

How is the sea in Cancun in December?

If you rent a room with a view of the ocean in Cancun, the first thing you’ll be dazzled about is the spectacular blue color of the sea when you draw back your curtains.

The ocean in Cancun is tropical, so the average sea temperature for swimmers near the shore keeps warm all year round. The average temperature of the water of Cancun in December keeps at an average of 26.5°C (78°F).

If you’re into diving, a 3 or 5 mm wetsuit is enough for a good, comfortable dive. You may also take a jacket along to warm up after your swim.

Visibility and good diving conditions depend on two aspects: rain and sunlight.

If you’re underwater in December, you’ll be able to see between an average of 15 and 30 meters ahead.

These optimal conditions are excellent if you want to dive into the coral reefs in the turquoise waters so that you won’t miss a thing.

Cancun in December showcases one of the windiest seasons of the year. Winds constantly blow between October and June, about 7.6 months. The average wind speed is 12.8 kilometers per hour (7.9 mph). This average increased to 14.8 kph in March (9.2 mph).

Since December is the seventh windiest month of the year, sometimes the sea can get rough, in case you plan to take a boat ride.

Cancun authorities forbid boats to set sail if the wind speed and the waves are too high.

What to wear in Cancun in December?

The Cancun weather in December is so pleasant that you don’t need warm clothes at any time of the day or the evening. Before March, Cancun usually gets north winds, making the evenings a bit chillier. Bring a light jacket.

Flip flops, shorts, sunglasses, and a T-shirt is all you need to wear most of the time. A hat or a cap prevents your face and neck from burning on sunny days while you always feel the average temperature.

However, a light jacket or a sweater should come in handy if you plan to go on a boat trip or walk by the shore at dusk. This is for people sensitive to low temperatures.

Festivals in Cancun in December

There are certain holidays and special dates that you can spend in Cancun while vacationing, so you don’t have to worry about missing those back home.

From December 16 to 25, Mexico also celebrates with processions and mass. Also, children go door-to-door singing carols in exchange for donations.

Unlike the U.S. or Europe, the big day is not December 25, but Christmas Eve (Dec. 24) or Holy Night. That day, families gather to eat a traditional midnight dinner, and sometimes children open up their presents.

Las Posadas is a tradition that lasts nine days, from December 16 to 24. This is to commemorate the journey of Mary and Joseph from Nazareth to Bethlehem.

During each of the days of Las Posadas, people pray or do some spiritual reflecting for some hours, apart from eating or breaking piñatas. You will be able to experience these Mexican traditions of Cancun in December and eat a special dinner at any of the hotels or restaurants, which prepare themselves well for the occasion.

On this day, they commemorate the deaths of the Holy Innocents, the children slaughtered by King Herod in an attempt to kill baby Jesus, according to the Bible.

Through the years, this holiday has turned into a day of pranks. Once someone is fooled, it is customary to say: “Innocent little dove that you let yourself be deceived.” This is also a day when people are known to borrow items and never return them.

In all Latin American countries, December 31 is more important and celebrated than Dec. 25.

Cancun celebrates New Year’s Eve like any other place, with big parties, drinking, dancing, and fireworks.

Hotels in Cancun in December usually organize a big party in one of the event rooms, accompanied by a delicious banquet, allusive decorations, and live music.

Also, they shoot fireworks over the lagoon for anybody around to see from hotels and walkways.

These are some things you should consider if you travel to Cancun.

If you want to swim in a relaxed fashion, the area of Playa Mujeres is the place to go.

The sandy beach is excellent, and the sea has a soft, sandy bottom with tranquil waters, ideal for swimming without the stress of dealing with big waves.

If you’re traveling on a budget, the cost for Cancun hotels tends to decrease in the low season, from May to June and from September to October.

Christmas, New Year’s, Holy Week, and Spring Break (many schools and college students) are the busiest and most expensive times to visit Cancun.

If you don’t like crowds and are not part of the Spring Break age group, you’ll be better off in the low season.

You can visit Cancun in late November or early December to avoid the 25 and New Year’s week. And if you decide to come at the end of December, we advise you to book way in advance.

Sargassum is a kind of algae that provides nutrients for small fish and other microorganisms. From April to September, this seaweed travels with the current in Cancun and accumulates on the shore.

When significant amounts pile up on the shore during this month, it starts to rot and produce a bad smell.

Also, floating near the shore changes the beautiful turquoise color of the water into a dark brown, not what you expect to see.

Fortunately, it won’t happen in December.

Looking at the ten-day weather prediction on the Internet isn’t always trustworthy. The reason is that tropical Cancun weather can sometimes be unpredictable due to high humidity and wind coming from different directions.

However, the only difference in weather is sun or rain, so in terms of temperature and clothes to wear, it should be no issue at all.

Typically, rain storms or showers don’t last long, so you can expect to see blue skies most of the time in December.

If you’re too sensitive to cold temperature, ensure the pool at your hotel is heated because, without it, water can be chilly in the mornings of Cancun in December.

Cancun mosquitoes in December are not much of an issue for these reasons: less rain, lower humidity, and the wind blows constantly.

This is true not only if you spend time lying on the beach or swimming, but also in case you go to the jungle, to the Cenotes (caves with water), or to see the pyramids near Cancun.

If you’re into diving, Cancun and Playa del Carmen offer you the chance to see bull shark mothers and their babies in the mangroves in December and January.

However, you should do this in the company of experts because bull sharks have a lousy reputation for being aggressive to humans… and even to alligators.

9# Things to do if it rains

🔦 Explore an underground river: Rainy days, cloudy days, or bad weather in Cancun is not a problem during this month. You can visit numerous rivers in caves with stalactites and stalagmites. Less than a couple of hours away from the hotel area, there are different kinds of tours for families and true adventurers. Check out this tour.

🤠 Visit the Museo Maya de Cancun: You can learn about one of the most advanced cultures in the history of Mexico and the world. There you’ll see 350 pieces found in archaeological sites in the Yucatan Peninsula.

🛍️ Shopping: There is a huge shopping mall in Cancun with hundreds of retail stores where you will find almost every clothing brand. There are also boutiques, beauty parlors, and candy stores, where you can spend hours walking. It all can be a bit expensive, though.

🏎️ ATV/Buggy: I rode a buggy in the rain; it was a crazy experience! There were mud puddles everywhere and 0 dust. Adrenaline guaranteed!

In downtown Cancun, you’ll find the Mercado 28 de Noviembre, where you can bargain when buying souvenirs, a great plan despite the eventual bad weather in December.

December is one of the best months to visit Cancun. However, you should avoid going at the end of the month if you don’t like the crowds of tourists.

So, do you already know what you plan to do? 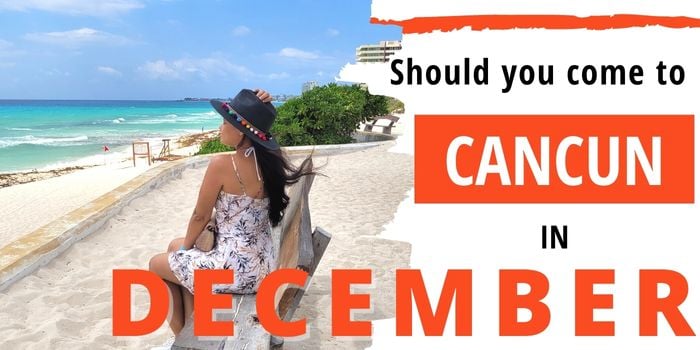