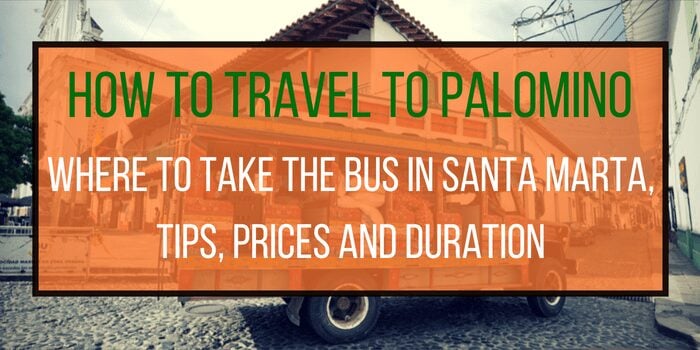 When you’re traveling to a foreign country, you’re allocating an essential part of your time looking for stuff. It can be for food, bed, parties,  etc. And it’s also the case for buses!

It’s super easy to catch the bus to get to Palomino. Even my grandma could do it, and she has got no leg (joke).

Before you leave, don’t forget to check our list of the best hotels in Palomino.

More than 3000 travelers have already used our Colombia travel guide

I’ve been exploring Colombia since 2015 and put all my knowledge into one Ebook. It’s free and accessible now. 👇

How Can You Catch a Bus To Palomino

A] Where is Palomino

Palomino is on the Caribbean Coast between Santa Marta and Cabo de la Vela. There is only one road linking these two points. And between, there are other touristic sites like Tayrona or great hostels like El Rio or  Costeño beach.

For these reasons, many buses are passing through Palomino.

B] Where can I take the Palomino bus in Santa Marta

Also, if you’re at the bus station of Santa Marta – Because you’re arriving from Cartagena de Indias by example, you can take a Palomino bus in the direction of Rioacha – A city after Palomino.

C] Taking the Palomino bus between Riohacha and Santa Marta

It’s simple! You just have to wait on the side of the road. Buses will stop to pick you up and will ask you where you wanna go.

So, ready to take the bus to get to Palomino?

What Should You Know About Colombian buses

If you’re coming from a more developed country like Europe or USA, you could except that price tickets, bus schedules, itineraries, and bus stops are set in stone.

And as we are optimistic travelers, let’s find out the advantages of it.

A] Bargain the prices

Yes, there are official prices for each company. However, as the bus is the public transport most used in Colombia, there are many companies. And everyone tries to attract as many customers as possible to make each journey profitable – like SNCF or KLM for the trains and flights.

If you’re asking – politely like an English gentleman – if there is a discount, they could answer … YES!

Know that it only works for bus tickets you’re buying at the office. The ones you catch directly on the road usually don’t offer a discount – Mostly because the distances are too short for that.

B] Buses are everywhere

As I said, there are plenty of bus companies in Colombia. You don’t have to stress with your schedule. You will find one anyway.

In the case of long bus distance – big city to big city -, check out the Bus Terminal’s website of the city or ask the reception of your hostels when buses are usually leaving. Arrive at the bus station 1 hour before the departure, and you will get one.

Regarding the shorter distance (1-2 hours). If it’s a touristic place, there are usually buses leaving every 30 min from 7 am to 7 pm. Easy, right?

Again, there is a difference between short and long-distance. In the case of a journey Bogota-Medellin, bus companies try to respect a schedule. It means they won’t stop on the side of the road to pick up other passengers.

But it’s not the case for short distances like the Palomino bus. In this situation, they aim to fill in the bus with people, boxes, chickens along the road. It’s not that important if you’re arriving 30 min late.

Where to go after Palomino

There are many cool places on the Eastside of the Caribbean Coast.