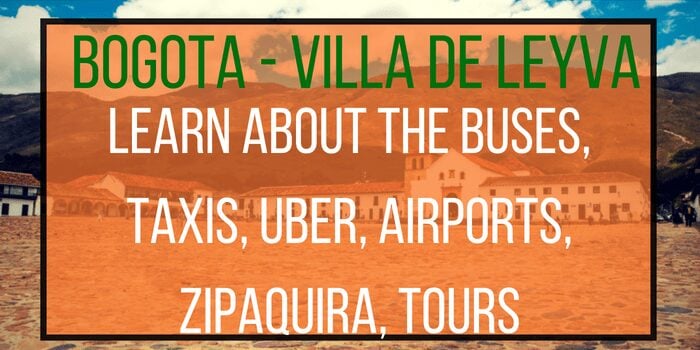 Is there an easy way to travel to Villa de Leyva from Bogota?

After the reading of this post, you should be able to find the ideal Villa De Leyva – Bogota’s bus for your itinerary.

Bogota – Villa de Leyva: What you must know

Where is Villa de Leyva: It’s a small colonial town in the region of Boyaca, 3.5h up north from Bogota. Find more colonial towns here.

Where to take the bus in Bogota: Terminal Salitre or Terminal del Norte.

Can you do a round trip from Bogota: Yes, but I don’t recommend it. Check out this tour if you absolutely want to do it in 1 day.

How long should you stay in Villa de Leyva: 3 days

Free online guide on Villa de Leyva to access, in a few clicks, all the practical information to visit this cute colonial town.

Travel easier between destinations: If you don’t speak Spanish and worry about taking public transportation, we have the solution.

We have a partnership with the company Colombian Buddy. They organize private transportation throughout Colombia. They speak good English and answer quickly.

Use our online form to contact them and get 5% discount on all their services.

T. Contents: How to travel to Villa de Leyva

Is the day trip Villa de Leyva – Bogota worth it?

The answer is NO. You should sleep at least one night in Villa De Leyva.

You need at least 3h30 to travel from Bogota to Villa de Leyva.

To convince you to stay longer, I wrote a kick-ass list of the things to do in town.

How to get from Bogota to Villa de Leyva

There are different options to get to Villa de Leyva in Colombia.

1. The Backpacker way | Cheaper but longer

There are two terminals in Bogota where you can catch a bus to Villa de Leyva:

The Terminal Salitre is located in the center of Bogota. Hence, it takes more time to get to Villa De Leyva. However, there are more bus options and it’s closer to Chapinero and La Candelaria.

I don’t book these buses in advance when traveling to Colombia. I just show up at the bus terminals as they leave frequently.

7 bus companies are going to Villa de Leyva from Bogota. They don’t pass through the same cities. Let’s rank them by duration:

Tip: Always ask at the counter if the bus is a direct one.

As you can see, Rapido El Carmen is perfect if you want to visit Raquira – Lovely handicrafts – on your way to Villa De Leyva.

Or La Verde, if you prefer to explore the Salt Cathedral in Zipaquira.

It’s a bit complicated to get to the terminal Del Norte by using public transport. You have to walk alongside the road. Therefore I always take an Uber or Taxis.

There are two options to get to Villa De Leyva:

Or take a bus in the direction of Tunja then another one to Villa de Leyva – Departures are more frequent:

The last buses leaving from Tunja to Villa de Leyva are at 6h30 pm.

A taxi or an Uber will accept to drive you to Villa de Leyva, but he won’t wait for you all day – Except if you pay him.

It could be a good option if you land in Bogota but you don’t want to stay in the capital. Order a private vehicle from the airport El Dorado to Villa de Leyva.

Travel easier between destinations: If you don’t speak Spanish and worry about taking public transportation, we have the solution.

We have a partnership with the company Colombian Buddy. They organize private transportation throughout Colombia. They speak good English and answer quickly.

Use our online form to contact them and get 5% discount on all their services.

3. The Comfortable Way – Book a tour

Villa de Leyva is one of the most well-known colonial towns. Colombians love to get there for the weekends, especially if Mondays or Fridays are a public holiday.

Hence, there are many tours organizing expeditions from Bogota.

Don’t make a day trip to Villa De Leyva from Bogota. You will wast your time.

Prices & Durations with a tour (+)

But if you’re in a rush, you can leave early and come back late the next day. Some tours offer the possibility to stop at the Salt Cathedral in Zipaquira or/and in Raquira for buying Handicrafts.

There are some insane prices on the internet. Don’t pay 500$ per pers for a 2-day trip to Villa De Leyva. It’s a rip-off.

4. From the Bogota Airport to Villa de Leyva

The easiest way is to take a taxi or private transport. Around 350 000 COP /1hour

If you decide to use public transportation, it will be cheaper but longer.

If you don’t get a direct bus Bogota – Villa De Leyva, you will have to stop in Tunja. Don’t leave too late from Bogota – Avoid after 3 pm -. Otherwise, you could be stuck in Tunja.

From Zipaquira To Villa De Leyva

On your way to Villa de Leyva from Bogota, you can visit the Salt Cathedral in Zipaquira. You have to take the bus via Chiquinquira / Zipaquira.

Then, you have to catch another bus to Villa De Leyva.

There are two options:

Just pick the first one coming on the main road.

How To Get From Tunja To Villa De Leyva

Some buses leaving from Bogota to Villa De Leyva stop in Tunja.  Then, you will have to take a bus from Tunja to Villa de Leyva.

Don’t worry, it’s super easy. They almost take you by the hand to put you on the next bus.

How to Get From Raquira to Villa De Leyva

Many buses leave from Raquira to Villa De Leyva. Ask at the counter desk the bus schedules to Villa de Leyva.

From Villa de Leyva to Barichara and San Gil

First, you have to travel back to Tunja. Once there, grab any buses in the direction of San Gil.

When you will arrive in San Gil, you must leave the main bus terminal – outside the city – and take a taxi for another terminal called Terminalito.

Then, catch a bus in the direction of Barichara.

Another alternative is to travel by private vehicle from Villa de Leyva:

From Medellin to Villa De Leyva

There is no direct bus Medellin – Villa De Leyva. You have to go back to Bogota or San Gil first.

How to enjoy Colombia?

👉 45 unique travel guides | Transportation, accommodation, and activities.
👉 Discover the best experiences (with discounts)!
👉 An online map of Colombia.
👉 Our best advice for your trip.
👉 A great interactive ebook to travel like an expert.
👉 Our solution to travel stress-free.

After 5 years in Colombia, we wrote a mind-blowing Free guidebook to help you to travel through Colombia…

Wanna fall in love with Colombia?

Keep me for Later 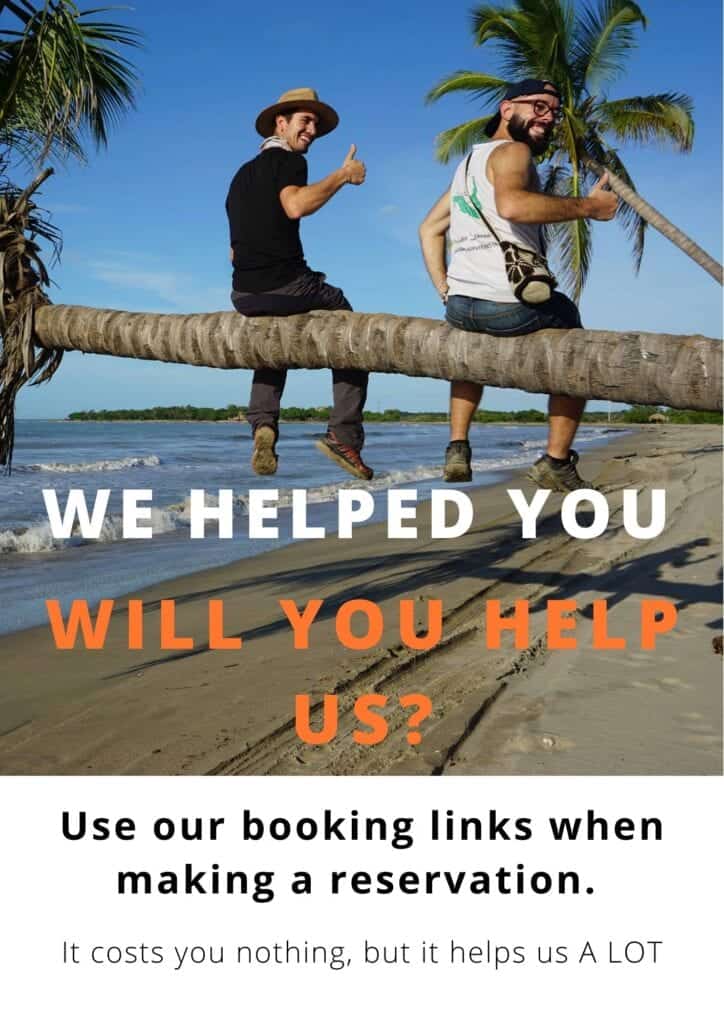