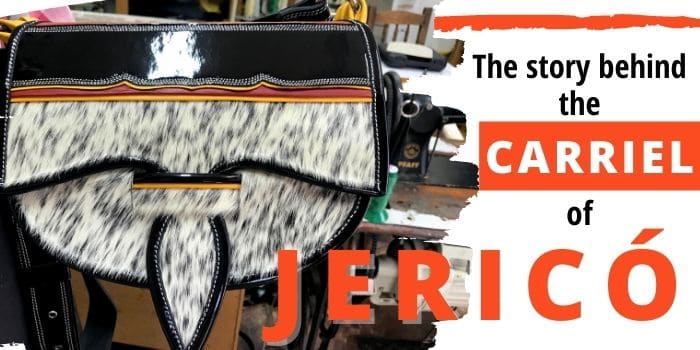 – “Tom, the real name to use is Guarniel and not Carriel.“

Thus begins my interview with Rubén Darío Agudelo, the most famous craftsman of Guarniel of Jericó.

The Guarniel (or Carriel) was the essential equipment of the muleteers between the 19th and 20th centuries.

– “It was much more than a leather bag. It contained the most precious objects of its owner. “Dario tells me.

Let’s start by understanding the muleteer’s way of life.

The adventurous life of the muleteer of Colombia (arrieros)

In the 19th century, many people settled in Antioquia and the coffee region. The houses became hamlets and then villages and cities.

But there was a problem.

The landscape of the Andes does not allow the building of new roads easily.

How could these villages communicate (no telephone line yet), trade, spread?

The muleteers made it possible. They crossed the Andes (sometimes over ten days) with their thirty mules) to sell goods and bring mail and news. These brave guys were one of the principal actors in the region’s development until the beginning of the 20th century.

To survive during these crossings, you had better be resourceful and, above all, well-equipped.

As you can see, there were quite a few objects.

Hence the creation of the famous Guarniel.

In the beginning, bags used by the nomads of North Africa inspired the Colombian muleteers. Over the years, they have made many modifications.

According to written records, people used the word Guarniel first. Besides, the artisans are called Guarnielero, and their store is a Guarnielería.

We are not sure who had the idea of the first guarniel. But it was probably a Paisa (inhabitants of Antioquia).

“In this, as in every highlander story, there was always an alert and clever Paisa, who reduced the size of the ‘care all,’ made it in leather, added more pockets, and many more things. That was the real inventor of the Carriel Paisa, an interpreter of his time who found a way to make an element in which the family, the woman, mistrust, tobacco and liquor, vanity and machismo, respect, love of work, weapons, and gambling could fit in orderly. All these elements already existed among the mountaineers dedicated to the mines and coffee plantations.”

One thing is sure, however.

The guarniel comes from Jericó.

More than 3000 travelers have already used our Colombia travel guide

I’ve been exploring Colombia since 2015, and I’ve put all my knowledge into one Ebook. It’s free and accessible now. 👇

Since I am staying a month in town to develop our tourist offer, I could not miss the Guarniel of Jericó.

When I asked around, everyone told me about the Agudelo family and the Guarnielería Carrielarte.

In front of me, there is a small shop of 12 square meters that stands in the street corner, with two open doors that allow curious visitors to observe Dario Rubén Agudelo and his son-in-law Felipe.

I can regularly hear the sound of the Guarnecedora that sews the yellow, red, and green line colors on the traditional Guarniel of Jericó — yellow and red are the color of the flag of Jericó, and the green represents the mountains of Antioquia.

Then the tic tic tic of the sewing machine gives way to the slush of the finger spreading the glue between two pieces of leather, followed by the muffled sound of the wooden mallet.

In the Agudelo family, the knowledge of the Carriel of Jericó is spread over 3 generations.

His father trained in Guarnielería in Jericó more than 70 years ago. The love of a job well done and the desire to preserve traditions have allowed the company to stand the test of time.

-” Symbol of the strength and culture of Antioquia, this leather bag, emblem of the Colombian muleteers and farmers, keeps in its pockets that intangible heritage for which all Jericoanos are proud of,” declares Dario proudly.

This year (2021), the Carriel – Guarniel Antioqueño has been declared as Cultural Heritage of the Nation.

I already told you about the 3 colors that represent Jericó and Antioquia (green, yellow, and red). Let’s see the other essential points.

→ The material used is leather. A quality Guarniel must be composed of 90 to 100% leather.

The reason is simple.

The muleteer used it every day and in every weather. It had to be resistant.

→ Then, it must have 12 pockets, including 4 secrets and one super-secret. These secret pockets —called secretas— were used to keep the most precious items such as money and photos of these lovers. Before, it was forbidden to mention its existence to women. Yes, the antioquia muleteer was macho.

→ The different pockets are built like an accordion to expand according to the quantity of object carried. The leather of the purses is yellow.

→ The Carriel of Jericó is composed of 115 – 124 pieces of leather. These are first cut skillfully with a sharp knife. The main piece, which serves to close the Carriel – “la tapa” – is the most delicate to make.

Then comes the stage of assembling the Carriel — bastear.

Then, it is the turn of the sewing. On a Jericó Carriel, you have to find the Antioquia mountains in three locations.

→ On the tapa, we find the cow skin. Initially, it was the skin of otter or tigrillo. This one must be silky and not messy!

→ Initially, the guarniel of Jericó had an oval shape. Then it evolved according to the needs of the users. As soon as it was necessary to carry books and notebooks, the rectangular shape became more practical.

It is long and meticulous work. An experienced craftsman takes 1 to 1.5 days to create a Carriel of Jericó.

Besides, if you intend to buy one, always check that there is a stamp with the Guarnielería’s name. It will be on the back of the Carriel, on the reinforced side.

-” Unfortunately, today’s youth do not want to become artisans anymore. It is a job where you have to work long hours for a modest salary.” says Dario with a slight note of melancholy in his voice.

In any case, this did not discourage his two daughters (Alejandra and Carolina) and his son-in-law (Felipe) from joining him in this adventure.

– “The succession is assured. Felipe makes the best tapa (front part of the Carriel) of all Jericó. And my daughters have been trained in different ways to work and design leather. We know how to adapt to new demands,” says Dario proudly.

Thanks to the Agudelo family, the soul of the muleteers of Antioquia won’t disappear into the clouds yet.

The Carriel de Jericó is part of our list of things to do in Jericó. Also, don’t hesitate to read our hotel reviews to find the perfect fit.

Where to travel after Jericó

Around Jericó and in the entire department of Antioquia, there are fabulous destinations that you can add to your itinerary in Colombia :

The 6 best experiences you shouldn’t miss

Unique experiences in the Amazon forest

How to rent a boat in Cartagena?

Discover the desert of La Guajira and the Wayuu culture

1 or 2 day rafting trips in an extraordinary natural area